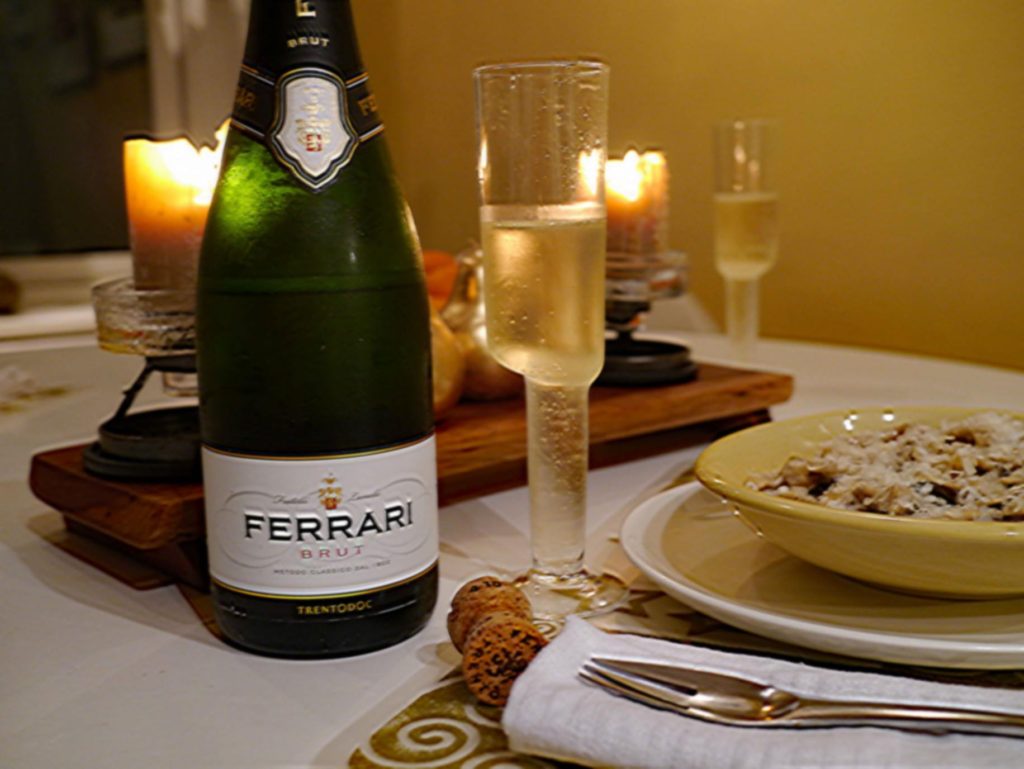 The very name “Ferrari” conjures up such adjectives as “sleek” or “sexy.” We're not talking about sports cars here. In Trentino, Ferrari is the name of a top producer of sparkling wines. The simple brut is the foundation wine of the Ferrari house, generally retailing under $25, but it tastes far richer and more elegant than its price tag. “Sleek” and “sexy” definitely apply. The tradition of sparkling wine on New Year's Eve is a laudable one. We like to combine it with the Chinese tradition of “long-life” noodles for the New Year. (That gives us the excuse to repeat the meal for the Chinese Lunar New Year, coming up February 5.) This year, we made a rather rich mushroom tagliatelle with heavy cream, sage,...Read More
We're in the midst of the tomato and basil harvest--lots of Costoluto Genovese tomatoes and lots of Genovese basil. Most nights that means slicing up some fresh mozzarella cheese and enjoying giant plates of insalata caprese. But what do you do with the tomato shoulders and irregular bits left over when you make a pretty plate of caprese? We took a little inspiration from Sicily and added lemon and ground pistachio nuts for a solid pasta plate that takes full advantage of the harvest. FARFALLE WITH TOMATOES, LEMON, AND PISTACHIOS Serves 2 as main dish, 4 as pasta course Ingredients 2 cups farfalle (bowties) 1 1/2 cups peeled, chopped tomatoes 1/2 teaspoon sea salt 2 tablespoons olive oil 2 cloves garlic, grated grated zest of...Read More
Our latest book, Food Lovers' Guide to Vermont & New Hampshire (Globe Pequot Press), just arrived two days ago and it brought back fond memories of the research. One of our favorite meals was at the Bedford Village Inn, when Benjamin Knack, fresh from a season on Hell's Kitchen, had just take over the dining program for this romantic destination property. It so happens that Ben makes a killer gnocchi, which he claimed was so simple that even his then 4-year-old daughter could do it. There are a couple of secrets to getting just the right texture. The potatoes should be cooked so they “squeak like Styrofoam when you squeeze them,” he says. And they should be pushed quickly through the sieve so the potato...Read More
Ultimately, we did visit the amazing museums at Vatican City—and here's our sneaked photo of the Sistine Chapel ceiling to prove it. (Yeah, like we were the only ones....) But we have to admit that we were originally waylaid by Rome's greatest gourmet food shop. And who could blame us? Gastronomy is Italy's other art. Or maybe its other religion. When we'd finished eating lunch at Franchi (see previous post), we decided that it was a good time to stop in at Castroni (Via Cola di Rienzo 196, Tel: 06-68-74-383, www.castronicoladirienzo.it, open Mon-Sat 8am-8pm), reasoning that since we were already stuffed, we would be immune to the lures of the merchandise. It was only next door, and we'd still have plenty of time to get...Read More
Much as we love Trastevere and its restaurants, one of our other favorite eating establishments is right on one of Rome's most tourist-thronged plazas—just the type of location that we usually avoid at meal time. But when we stopped for coffee one morning at Ristorante-Caffè di Rienzo (Piazza del Pantheon 8/9, 06-686-9097, www.ristorantedirienzo.it), we struck up a conversation with Marianna Di Rienzo, whose father opened the restaurant in 1952. She even invited us to come back at dinner time so that the chef could show us how to prepare some classic Roman pasta dishes. Chef Alessandro Sillani has been with Di Rienzo for 15 years. When we returned around 6 p.m., he and his assistant Tsatsu Nicholas Awuku were not even breaking a sweat sending...Read More
Perhaps I have such an affinity for Friuli because I lived for more than a decade in the Pioneer Valley of western Massachusetts, where Hadley asparagus, grown on the rich riverbank soils of the Connecticut River, is some of the finest "grass" in the U.S. I'm in Cambridge now, but I still gorge on Hadley asparagus during the short May season. For the last couple of years I have worked to adapt recipes from an authoritative Friuli book on the subject called simply Asparagi 103 ricette by gourmand Antonio Boemo. It just might be the final word in great asparagus cookery, featuring recipes from some of Friuli's finest chefs. (Thanks, Bepi Pucciarelli, for finding the out-of-print book and helping with the translations.) Here are a...Read More