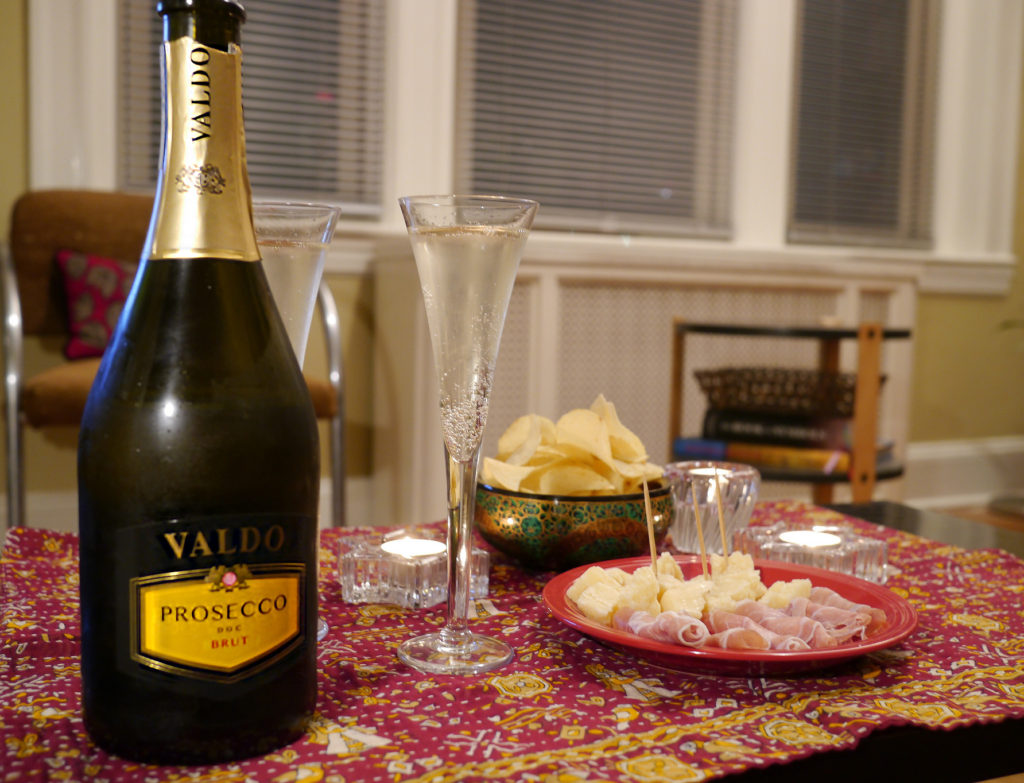 Nothing quite catches the magic of candlelight like a glass of sparkling wine. Now that we're approaching the longest nights of the year, we're turning to a variety of sparkling wines after sundown. Of course, the fact that fizzy sips are associated with the holidays doesn't hurt—though we're not sure why anyone needs an excuse to drink sparklers. Prosecco is a natural for snack time. Made with Glera grapes in the Veneto near Treviso, it's probably the most accessible and affordable sparkling wine out there. The brut level of dryness happens to be perfect with some other northern Italian standbys—chunks of aged Parmigiano-Reggiano cheese and rolls of thinly sliced prosciutto. Inspired by the caffès onVenice's Piazza San Marco, we've added some plain salted potato chips...Read More
The most rarefied Prosecco may come from the hills between Conegliano and Valdobbiadene, as suggested in an earlier post but some superb examples also come from the plains and river valleys eastward toward Pordenone in Friuli. It may be an entirely different political region from the Veneto, yet it's less than 40 km (25 miles) from Conegliano. Driving east on the A28, it's even worth taking a 15-minute detour to the village of Francenigo to see the historic power-hammer smithy — the Maglio di Francenigo — that's one of the last touchstones of the agricultural heritage. The Pessot family started making tools to till the fields and vineyards, using water power from a falls on the Livenza River to raise and lower the power hammer...Read More
[caption id="attachment_2618" align="alignleft" width="510"] Vineyard of Glera clones at Oenology School.[/caption] According to the Prosecco DOC consortium, farmers in the Friuli Venezia-Giulia village of Prosecco began making sparkling wine from the grape now known as Glera around 1600, and it became so popular that it spread to nine provinces in the 17th century. (Those provinces now lie within Friuli and the Veneto, and the symbol of Prosecco DOC is nine wine glasses.) Originally a farmhouse wine, Prosecco would stop fermenting in the fall when the weather cooled, then begin again in the spring, when it was sold as a “frizzante” wine. Antonio Carpenain invented modern Prosecco in the mid-19th century when he began using a pressurized tank for a second fermentation. His adaptation of France's...Read More
Wine is one of the easiest and best ways to bring the taste of travel back home, so this post initiates what we're calling The Wine List — travels in wine country with a focus on the wines themselves. And we launch TWL with a journey through the beautiful towns and delicious wines of the Prosecco DOC region of the Veneto and adjacent Friuli--all within driving distance of Venice. Prosecco is one of those wines that's almost too good for its own good. The light sparkling wine made from the Glera grape is the signature sipping wine of Venice, and it is synonymous with laughter and indolent afternoons at an outdoor cafe (see above, on Piazza San Marco). The wine is made in a tightly...Read More